eSpark looked at how computer usage in schools has changed since 2009 using data from the National Center for Education Statistics. 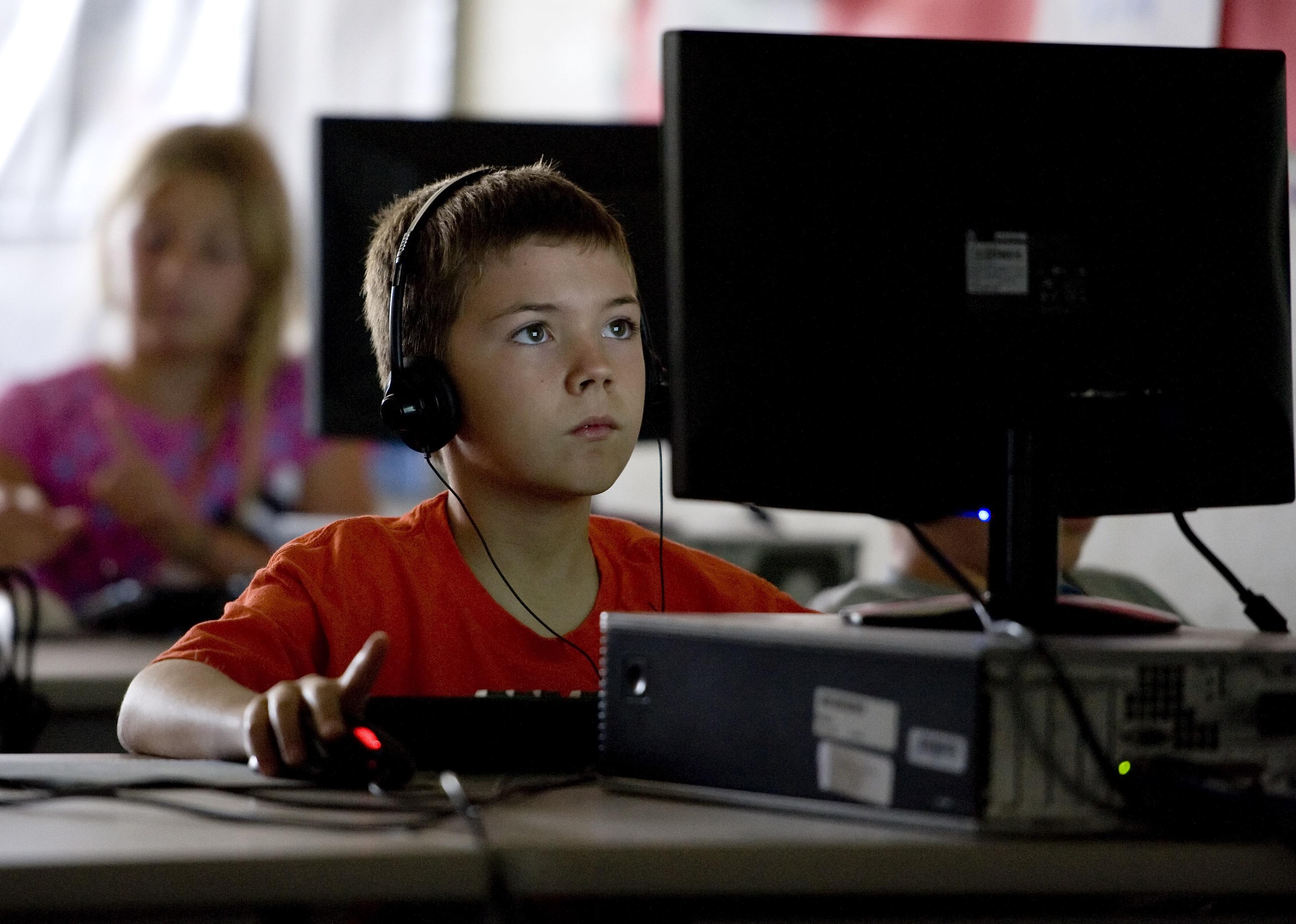 One measure of how much more prevalent computers are in schools is the way that teachers and students have been surveyed about their use. Distilling insights from the National Center for Education Statistics, eSpark looked at how computer use in public schools has changed over the past decade, including how the COVID-19 pandemic affected computer use in classrooms.

In 1983, there was one computer per 125 students enrolled in public schools, according to an article in Education Week. Some were being used for career guidance, not in the classroom. By 2009, the National Center for Education Statistics asked whether computers were available in the classroom, most of which were shared, and whether teachers occasionally brought in other computers for students to use. Computers are far more ubiquitous today, and the metrics available focus on whether each student is assigned their own computer and if they can take it home with them.

Some critics say the emphasis on the number of computers in schools fails to address how they're being used. A study in Peru, albeit looking at laptops for children at home, found no effect on academic achievement or cognitive skills.

When schools closed during the COVID-19 pandemic and students relied on remote learning, racial and socioeconomic disparities widened. Even a year into the pandemic, children were falling behind because of uneven access to computers, poor home internet connections, and a lack of direct instruction from teachers.

Most teachers used computers "sometimes" or less in 2009 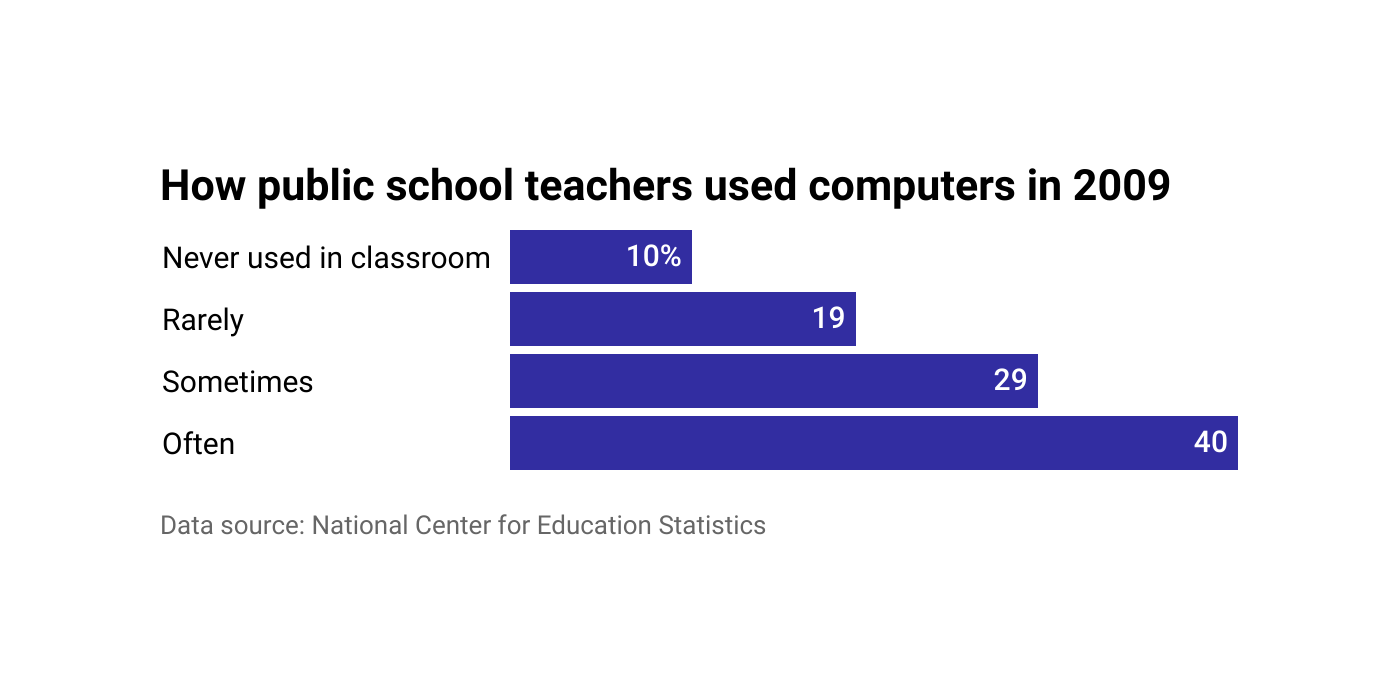 Computers were available in almost all classrooms in 2009 though not in the same numbers as in 2019. In 2009, 97% of public school teachers reported that they had one or more computers in their classroom every day. Meanwhile, 54% of teachers said that they could bring computers into the classroom.

Computers have become more widely available in schools since 2009 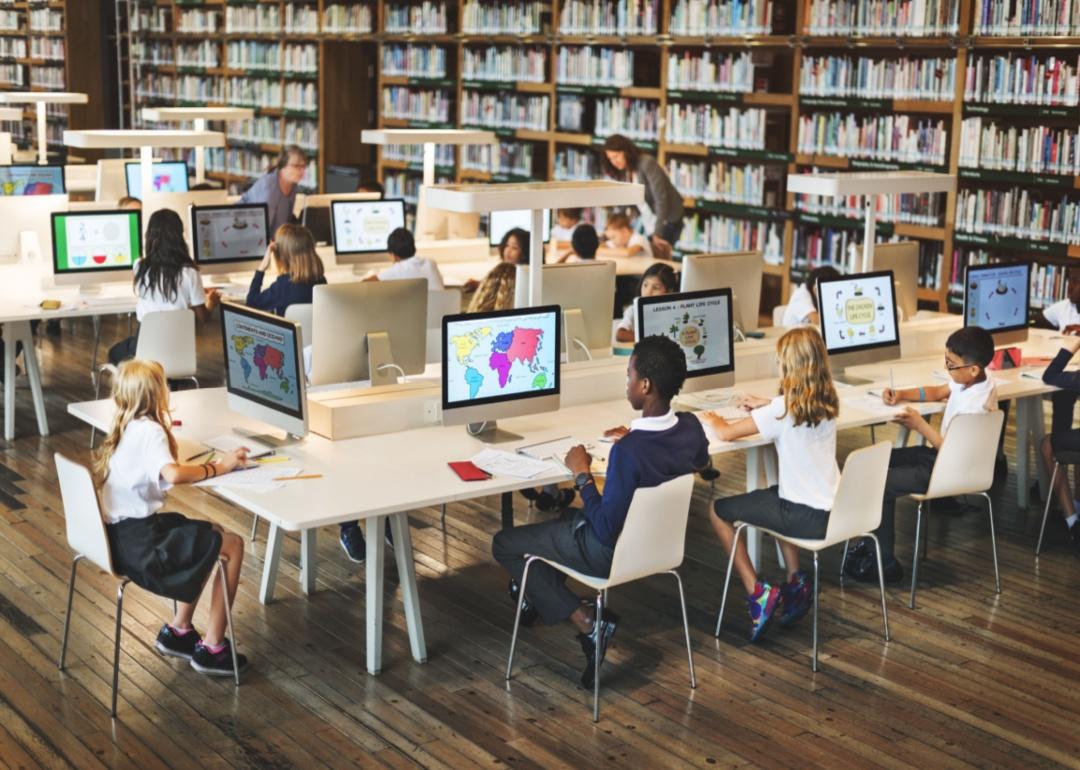 During the 2019-2020 school year, 45% of schools reported having a computer for each student and an additional 37% had a computer for each student in some grades or classrooms. Overall, about a third of the computers were given to students to carry with them during the school day, 39% stayed in a specific classroom, 16% moved between classrooms, and 10% remained in dedicated rooms such as computer labs and libraries.

One-third of schools credited technology with helping their students become more independent, while similar shares said it helped students learn at their own pace and think critically. Critics say however that there has not been enough focus on how computers in particular are used in the classroom. 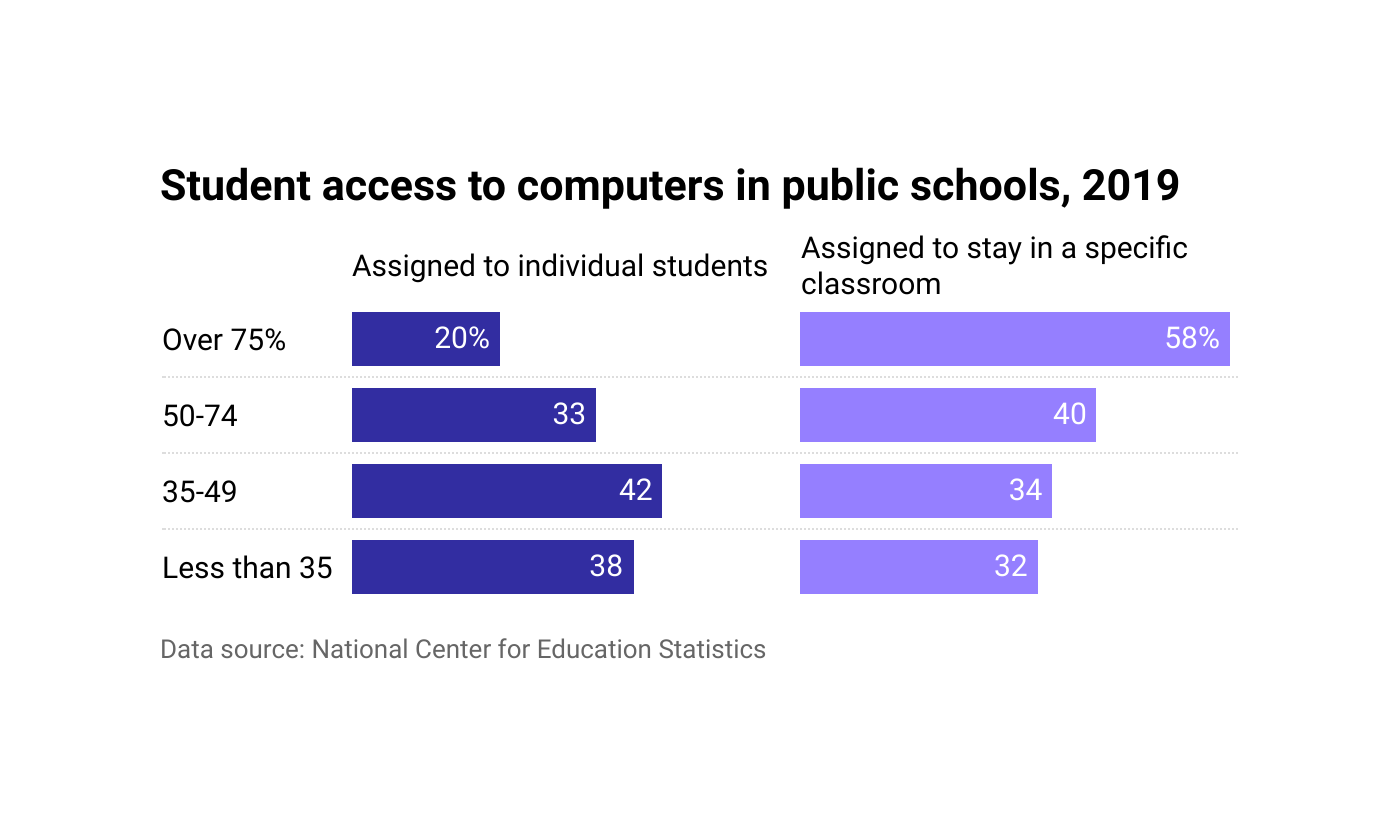 In general, 95% of 3- to 18-year-olds had access to the internet, 88% through a computer, and 6% through a smartphone, according to the American Community Survey. Among racial or ethnic groups, home internet access was the highest for Asians (99%) and lowest for Native Americans and Alaska Natives (83%). 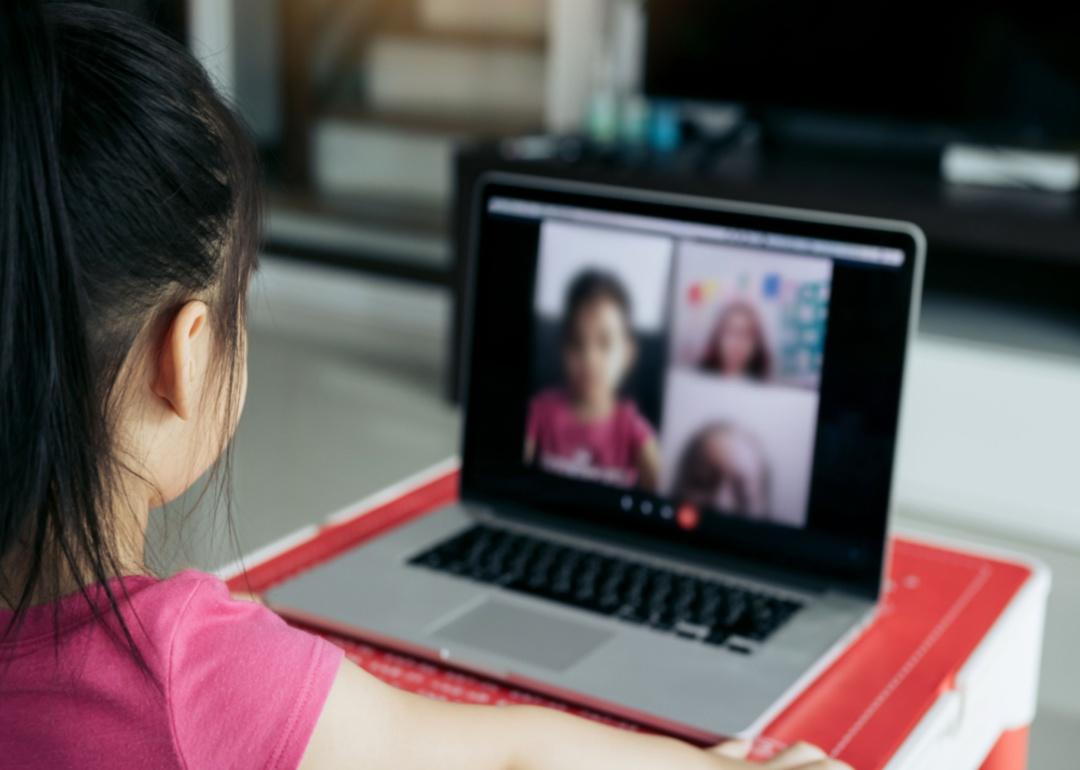 The pandemic highlighted inequities that already existed for poorer students. One study noted that although two-thirds of Americans own smartphones, only 61% of homes on average have high-speed internet. Six in 10 schools with high levels of student poverty had passed out electronic devices to those who needed them. Because of the pandemic, schools began distributing computers to students who otherwise didn't have one.

When the COVID-19 pandemic began, only about a fifth of schools planned for long closures. Nearly 31% of teachers said that their students' lack of access to devices and high-speed internet interfered with instruction. Teachers were worried that even when students have access to computers, they may fall behind without individual support.

Lessons from the COVID-19 pandemic 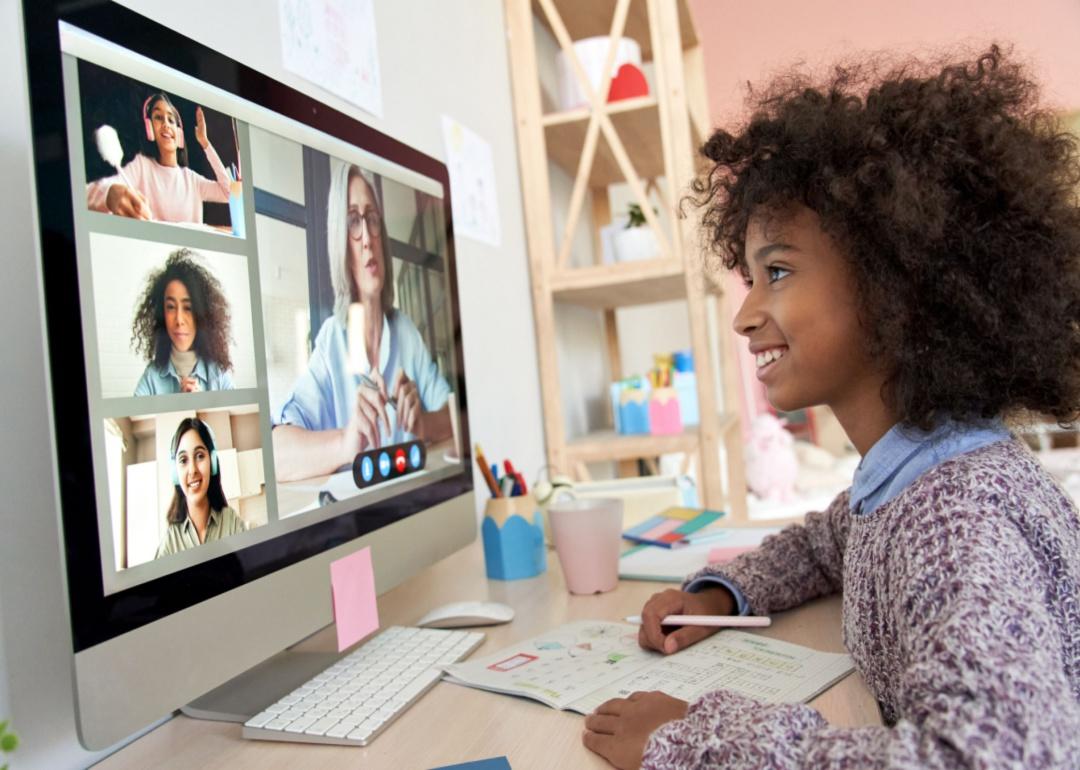 Kindergartners through second-graders were more likely to engage with learning due to difficulty using technology, the U.S. Government Accountability Office reported Teachers for these younger age groups reported that when they could incorporate "movement breaks" and provide personalized teaching in small groups, they were better able to engage with students. Although computers and other technology were essential to learning during the pandemic, teachers remained key, the World Bank found. For remote learning to be successful, interactions between teachers and students are critical, and technology can be a powerful resource in this regard.

This story originally appeared on eSpark and was produced and distributed in partnership with Stacker Studio.

Other items that may interest you